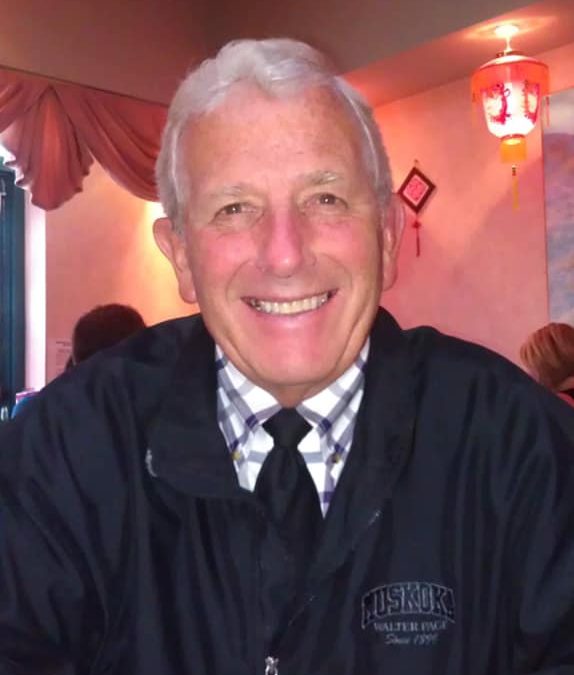 Peacefully at home on Wednesday, May 27, 2020, Bruce Ross Chapman entered into the presence of his Lord and Saviour, Jesus Christ. He was born the second oldest child and only son of William and Amy (nee Perry) Chapman on March 2, 1937. Bruce is survived by his cherished wife and best friend of 33 years, Patti (nee Dawe), his beloved children Bill (Kerstin), Dave, Karen (Dan) and Rick (Patty) and his ten grandchildren and their respective spouses and 4 great-grandchildren with one on the way. He is also lovingly remembered by his sisters Shirley (Ron), twin Barbara, Dianne and Mary Jane (Jim) as well as a multitude of loving in-laws, nieces and nephews, cousins, and longtime friends from near and afar. Bruce was predeceased by his first wife and mother of his children, Chris.
Bruce was born and raised in Etobicoke. He loved to reminisce about his school days, playing at quarterback for a championship Etobicoke Collegiate football team and his days working for Mr. Cox on the farm. This led to his love of agriculture and he eventually bought a greenhouse business, rebuilt those glass houses by himself and established his own business where he raised his family. Bruce was always involved in the community, refereeing, coaching, hockey association president and always taking the kids to their sports. He was also involved in playing his own sports – fastball and hockey. In later years he became affectionately known as “Dr. Hook”.
Bruce spent many times in the Algonquin Park area camping, canoeing and portaging with his boys. He also was part of the Chapman Boys Bible Class held in the YMCA at Dovercourt and College and took the boys there as well. Of course, there have always been horses in Bruce’s life from driving the team of draft horse on the farm to having his own while with his greenhouses to setting up the camp facility that eventually became known as Rocky Ridge Ranch (originally People’s Church Ranch). This is the Ranch’s 50 year of operation and Bruce has been at the head the whole time – Director, speaker, “Head Honcho” and much-loved leader. Bruce always did everything full throttle. He stuck to his principles because he was a man of his word, right or wrong, and his passion was to stay on track. That’s what everyone respected and honoured about him.
Bruce was also a true servant to his Lord. He was 3rd generation elder, taught Sunday school with a passion for youth and was always in demand. This passion carried him throughout his life and there are many, many individuals who are who they are because of his influence. Funeral arrangements are entrusted to the J. Scott Early Funeral Home. Online condolences may be left at www.earlyfuneralhome.com In lieu of flowers donations to Rocky Ridge Ranch would be appreciated. A Celebration of Life will take place at the Ranch at a later date.
Absent from the body
Present with the Lord
We Love You